Depending on what “official” site you visit, you will see four, five or six Thailand Regions.

For our purposes, we use the five regions set out in the Tourism Authority of Thailand website. These are:

Thailand Regions are then sub-divided into Provinces, or “changwat”. Thailand Provinces roughly resemble state divisions that you find in Australia or the USA.

Provinces are then subdivided into Districts or “amphoe”

Each district is then subdivided into Sub Districts (tambon). Tambon can also be translated as “township”

Tambon within cities or towns are not subdivided into villages, but may have less formal communities called chumchon.

A Sub District is then further divided into villages (muban)

So if you see an address such as:

Without going too deeply into Thai custom, unlike Australia, where house numbers on one side of the street are numbered 1, 3, 5, 7 and on the other side they will be numbered 2, 4, 6, 8 – the houses in Thailand are mostly numbered in the order in which they were built. So finding an address in Thailand may not always be a simple thing, especially for a westerner. Add that to the difficulties in translation and sometimes  a westerner will get totally lost in Thailand. 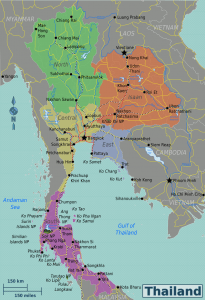